But in one special way, he is not your typical teenager.

Mitchell is a two-time national champion in the Braille Challenge — a prestigious competition for the blind.

“I guess it just shows that I can do things,” Bridwell, who was born blind, said. “I’ve been struggling throughout my junior year with the fact that I can’t do certain things.”

The 17-year-old Pittsboro teen learned to read braille when he was a toddler at the Indiana School for the Blind and Visually Impaired, where he will be a senior this fall.

He has persistent hyperplastic primary vitreous in both eyes, a condition where his blood vessels didn’t develop correctly and left scar tissue on his eyes.

“I went into surgery and (the doctors) said that they couldn’t do anything,” Bridwell said.

He first competed in the Braille Challenge when he was in third grade and he has been competing ever since.

Mitchell Bridwell reads letters that he typed on his Perkins Brailler typing machine, which is used in competition for the Braille Challenge, at his family’s home in Pittsboro, Ind., Thursday, July 12, 2018. The 17-year-old recently won the Braille Challenge varsity championship for the second consecutive year at the University of Southern California. Bridwell will be a senior at the Indiana School for the Blind and Visually Impaired this fall. (Photo: Jenna Watson/IndyStar)

The Braille Challenge started in 2000 and is an academic contest that promotes braille literacy. The yearly competition is hosted by the Braille Institute of America, a nonprofit that was founded in 1919 by J. Roberts Atkinson after an accidental gunshot left him blind.

“I guess that means that I’m the best of the best, but I mean there were people before me so you never know,” Bridwell said.

He is humble talking about his victories but admits he has a competitive side that gets nervous before competing.

The Braille Challenge has four categories: speed and accuracy, proofreading, charts and graphs and reading comprehension. 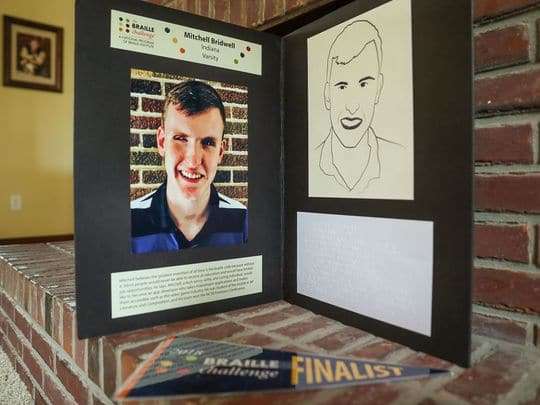 A poster board displays a biography and picture of Mitchell Bridwell that was displayed at the Braille Challenge recently, seen at his family’s home in Pittsboro, Ind., Thursday, July 12, 2018. The 17-year-old recently won the Braille Challenge varsity championship for the second consecutive year at the University of Southern California. Bridwell will be a senior at the Indiana School for the Blind and Visually Impaired this fall. (Photo: Jenna Watson/IndyStar)

“It’s very fun to hang out with people you haven’t talked to in a while,” Bridwell said.

Next year will be the last time Bridwell will be eligible to compete in the Braille Challenge and he admits he is a little worried about winning.

“I’m a little on edge because you never know,” Bridwell said. “I just have to work hard for it.”

The champion is hoping to get involved in the Braille Challenge Alumni Network after he is done competing.

“He is going to be one of the future blind leaders in the country,” Oliva said.

Bridwell plans to major in computer science at either Valparaiso University or Purdue University and go into app development because a lot of applications are not accessible to blind individuals.

“I personally would like to change that because instead of making separate applications for blind people, I want to be able to use the same application that sighted people can, so creating ways that those applications can be used by the blind community is one of my goals,” he said.

“I don’t want to be restricted by the fact that I’m blind,” he said. “I believe that everyone should have the same opportunities that everyone has.”

“Personally, I’d want to do the same thing sighted people are doing rather than do completely different things or tasks,” Bridwell said. “I want to bridge gaps because braille kind of does that for me and I feel like braille is amazing but it can only do so much in the grand scheme of technology.”