Santa Barbara Nite Moves traditionally attracts special guests for its endurance events on Wednesday evenings during the summer months World-class triathletes, runners, swimmers and athletes from a variety of sports have stopped by Leadbetter Beach to do the 1K swim, 5K run or both. 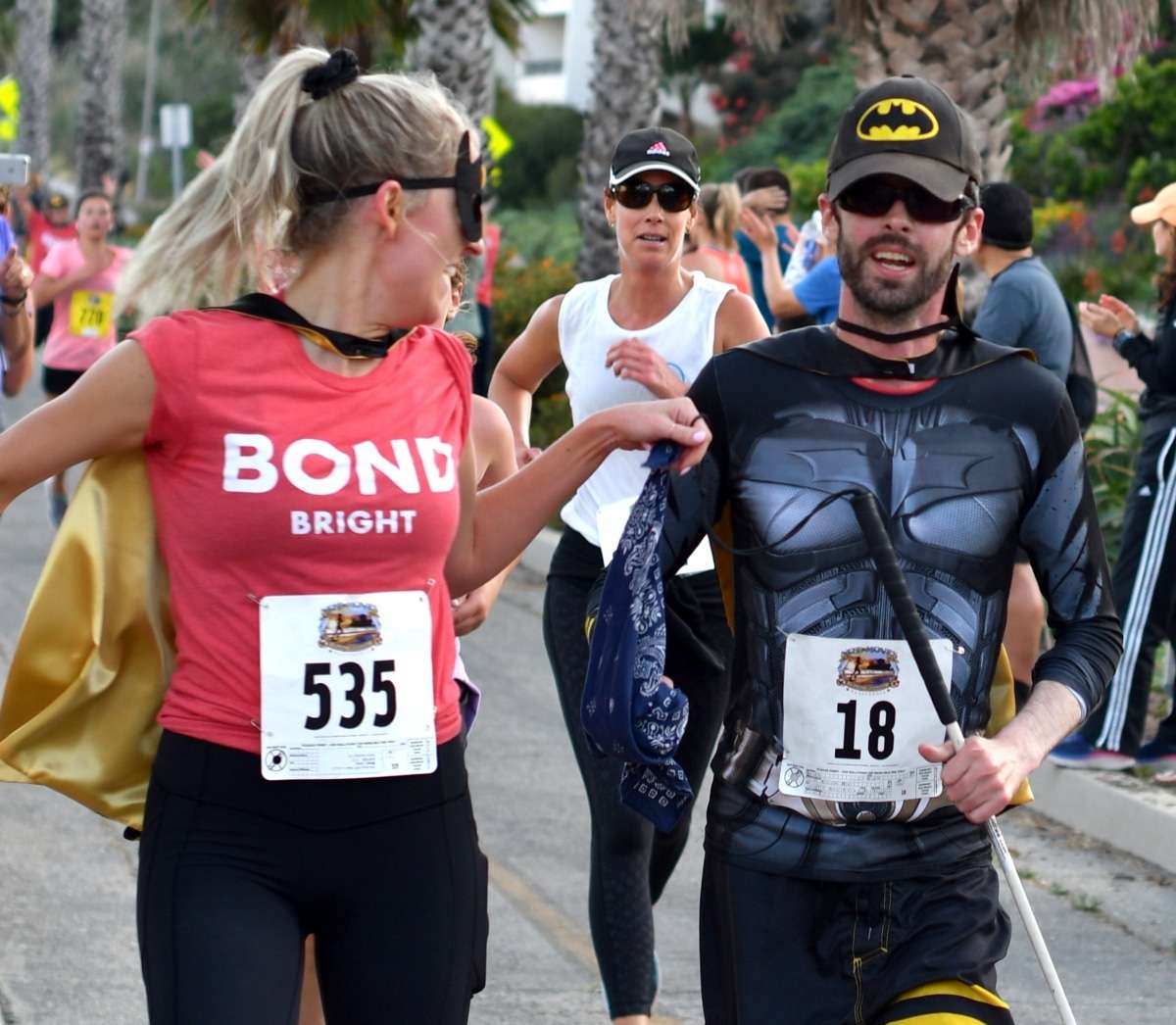 There was special group of athletes that ran the 5K this week.

Fifteen vision-impaired athletes from the Braille Institute in Santa Barbara were among the nearly 400 people to do the run from Shoreline Park, up Shoreline Drive to Reef Court and back to the finish at Leadbetter Beach Park.

They were guided on the course by members from Bond Fitness who trained with athletes for six weeks.

Carpinteria’s Beau Wilding was the first finisher of the group. Accompanied by guides Claire Shuman and Anthony Ortolan, he crossed the finish line in 30 minutes, 33 seconds.

“It was great,” the singer/songwriter said of the run, which was done in sunshine. “It was a little tough getting out at the beginning because there were so many people; it was a little claustrophobic and the sun was in my eyes.

“Those things, coupled with vision impairment, makes it difficult. But with the assistance of my friends here, Claire and Anthony, it was a little bit easier. It was good to have the Bond folks on board for their support.” 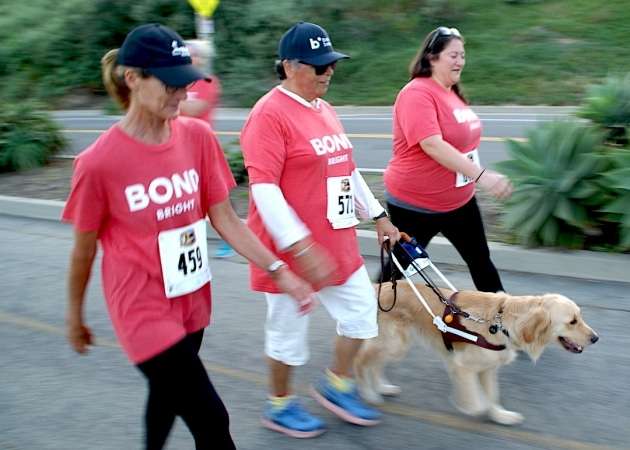 Wilding had experience running in a race. Two years ago, he ran the California International Marathon in Sacramento with the United States Association of Blind Athletes.

For most of the other Braille Institute runners, Nite Moves was their first time doing a race.

The idea of getting the Braille Institute to participate in Nite Moves came from Stephen Stowe, co-owner of Bond Fitness.

“It’s been amazing, the connections people have made … I’m just speechless,” said Stowe before the start of the 5K. “When you watch the connections of people supporting one another, this is what we do on a daily basis in the gym. But we took it outside.

“They’re all legit, even the people who are walking,” he said of the athletes. “They said yes to showing up to try this and do it, and that’s what it’s all about. That’s an athlete.”

Beau Wilding was the first finisher of the group from the Braille Institute at Wednesday’s Nite Moves event. His guides are Claire Shuman, left, and Anthony Ortolan. (Barry Punzal / Noozhawk photo)

The connection started when Stowe met Susan Cass, the executive director of the Braille Institute in Santa Barbara. Cass works out at Bond Fitness.

“He came up to me a couple of months ago when I was working out,” Cass recalled of Stowe. “He said, ‘I heard you’re the executive director of Braille Institute. I have an idea and I want to run it by you.’ His idea was to join sighted guides with our athletes and do a weekly training and get out there.

“We know physical fitness is so important to our overall wellness,” she continued. “I ran it by our orientation and mobility specialist — that’s the person that helps with the white cane training and how those people access their community— and she thought it was a great idea.”

Brianna Pettit, the team orientation and mobility specialist at the Braille Institute, was excited to introduce the opportunity to the students.

“What’s exciting for me is I’m an athlete, I grew up in Santa Barbara and I’ve done this race multiple times. But I’ve never incorporated those worlds,” she said. “For me, it was kind of an easy transition. I know what it’s like to run the race, I already know the route and I can teach everyone (at Bond Fitness) to be guides. 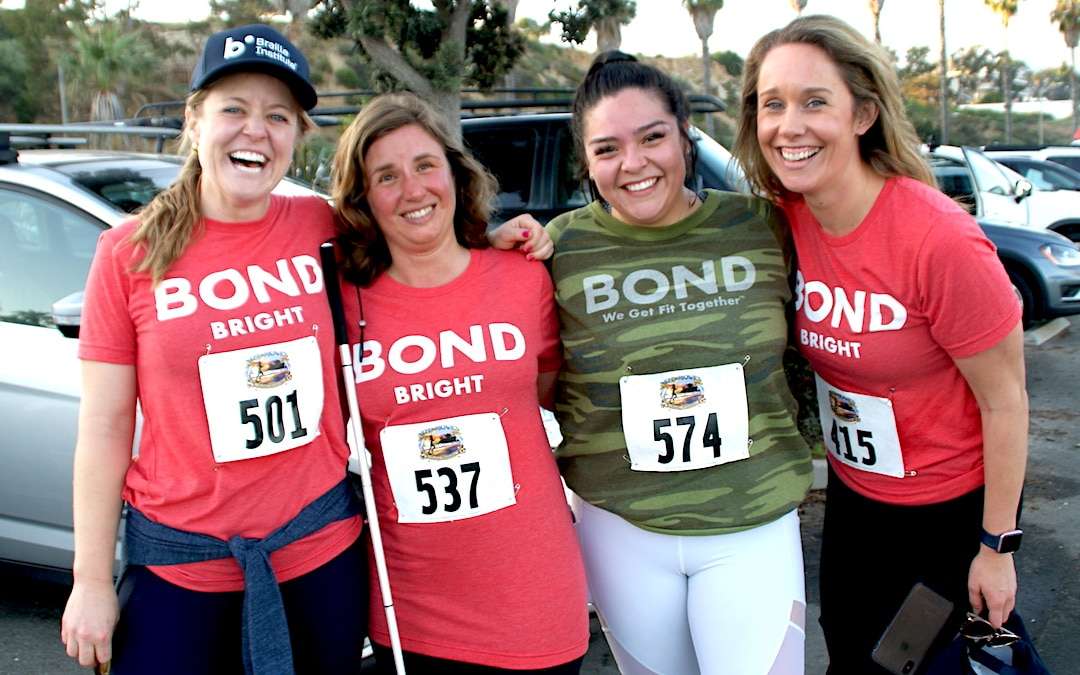 The athletes and guides trained together at the SBCC track and did a trial run on the bike path across from East Beach.

“The first day we went out to the Santa Barbara City College track it was awesome,” said Cass. “Within that first hour you saw all these folks who had probably never worked or interacted with people with little or no vision hit it off. By the end of the hour, they were chatting, they were talking about similarities and commonalities.”

Cass noted that the Braille Institute offers a variety of exercise programs, but integrating its students into a community event like Nite Moves was a big push in encouraging them to do things in their own time to stay physically fit.

“We wanted to get them out in environments where people can see them doing things that we’re so used to doing ourselves that we take for granted,” she said.

“When we were out at the track that first couple of weeks, we had people running on the track coming up to ask about Braille Institute and what we do,” she added. “They were happy and surprised to see our folks out there. It’s really been educational.

“For some reason, people with limited vision or no vision, they seem to be invisible to (full-sighted) people — no pun intended. They don’t know how to act, they don’t know what to do when they see someone with a white cane coming. They don’t know if they should speak to them or not. It’s been good practice getting out there and integrating everyone and coming together. It’s been great, not just for our students and athletes but for the community at large.” 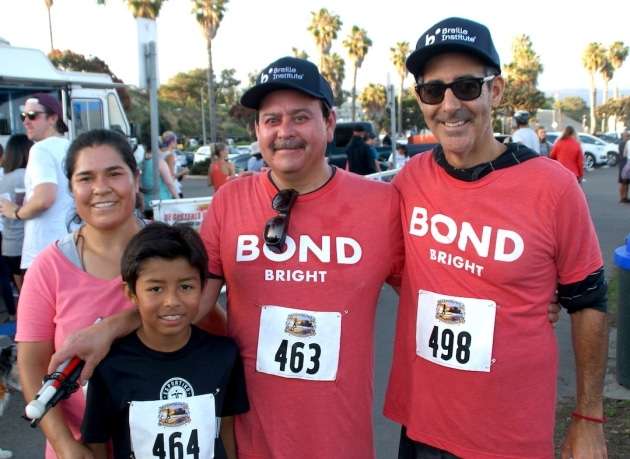 Ortolan, who ran track and cross country at UCSB, was impressed with Wilding’s running ability.

“He’s got a lot of training behind him, so it was no surprise,” Ortolan said of Wilding.

Shuman said Wilding teased her about not be able to keep up.

Explaining his impairment, Wilding said: “I have really good peripheral vision, I have really bad direct vision. My peripheral vision is such that I can see out of the corner of my eye, so I can run slightly behind him or her and I can tell where they’re going and where they’re stepping. Also, they’ll call out if there is a landmark such as a cone or a curb or a crack in the sidewalk, so I can avoid that. I kind of step with them.”

Enrique Diaz was doing his first-ever race. He was joined by his wife, Margarita, and their son, Ricardo.

“I’ve lived in Santa Barbara 24 years and I’ve never done a 5K,” he said.
He was guided on the run by Josiah Hamilton.

Asked for his reaction after he crossed the finish line, Diaz said: “I was so excited. They gave us good training at Bond Fitness and the Braille Institute. They’re amazing.”

Courtney Mazzola has skied black-diamond runs at Breckenridge in Colorado, has flown a plane, done equestrian sports and martial arts, but she’d never run a 5K until Nite Moves.

“It was a little challenging in a really good way,” said Mazzola. “It was like a group of friends coming together and everyone was just so supportive and encouraging.”

Her guides were Annie Hayes, Valeria Padilla and Sarah Barkley. 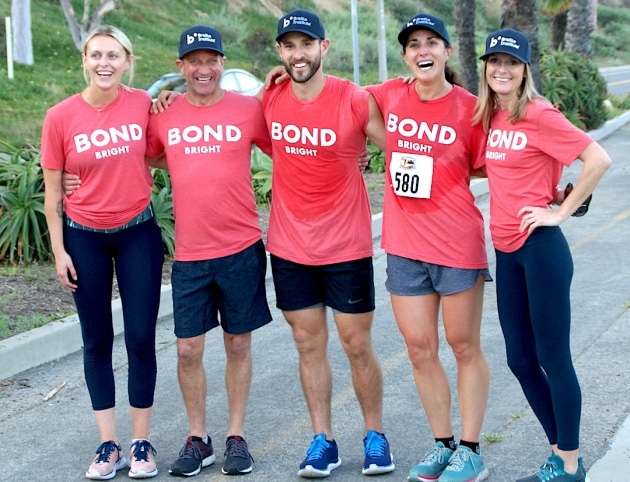 “You felt you can do it and that’s encouraged me to do more. I love being active,” Mazzola said. “I just moved to Santa Barbara a year ago. I haven’t had the opportunity to be really active, so this has been great to get back into it.”

Wilding hopes the Nite Moves event encourages other vision-impaired runners in the area to come out and race.

“I’m hoping some day we can have more of collective of vision-impaired and blind runners here in Santa Barbara,” he said. “That would be really awesome to have a division in the various other races we have here in this area. That would really make me happy.”

In Stowe’s eyes, the success of the event bodes well for future events for vision-impaired athletes and their guides.

“The relationships and connections are so strong,” he said. “I don’t see this ending tonight. No way.”