Sandra & Terence – The Legacy of a 46-Year Love Affair 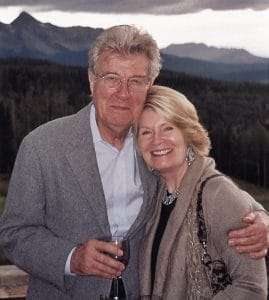 Just like a romantic movie, it was love at first sight for Sandra and Terence Marsh. Both were working on the 1971 film, Mary, Queen of Scots, starring Vanessa Redgrave and Glenda Jackson as the rival queens. Terence was an Academy Award-winning production designer who had worked on Lawrence of Arabia and received Oscars for Doctor Zhivago and Oliver! The couple’s fateful meeting would lead to a fulfilling marriage and creative partnership that Sandra describes as a “46-year love affair.” The film also jumpstarted a new profession for Sandra as Redgrave’s manager and agent.

Sandra later went on to found one of the first international agencies to exclusively represent the talent working behind the camera — producers, production designers, directors of photography, editors, and costume designers. Terence, known for his sweeping big-set designs and detailed craftsmanship on films like The Shawshank Redemption, enjoyed a distinguished career that earned him numerous honors. But at age 60, he began to experience vision loss due to macular degeneration. Nevertheless, he continued to work steadily for another ten years and received an Art Directors Guild Lifetime Achievement Award in 2010.

As his sight worsened, Terence, whose artistic imagination had transformed so many films, struggled with the new limitations. So, the Marshes turned to Braille Institute for help with optimizing his remaining vision. After a low vision consultation and recommendations for magnifiers, the couple became committed donors. Wanting to make a bigger impact to help others whose lives had changed due to visual impairment, the Marshes decided to fund a charitable gift annuity. Not only would it help Braille Institute students, but it would provide the Marshes with a safe return on their investment and payments for life. Sadly, Terence passed away in January of 2018. But he leaves behind a legacy that guarantees him a noted place in film history, provides Sandra with treasured memories, and touches the lives of many thousands of people with vision loss.

To learn how a charitable gift annuity can meet your financial needs, please call 1-800-BRAILLE, ext. 1256 or visit bialegacy.org to learn more.