Meet John Phillips, a Vision-Impaired Professional Chef Who Shares His Skills at the Braille Institute

I don’t cook. It’s not that I can’t; I just don’t enjoy it. Still … I can’t imagine what it would be like to learn to cook if I couldn’t see.

At the Braille Institute in Rancho Mirage, Chef John Phillips teaches people with limited vision how to develop what he calls “the basic skills a food handler would need to know in a professional kitchen,” including using knives safely (“There are NO plastic knives in my kitchen!”), chopping vegetables, making sauces, defrosting frozen foods, baking meatloaf, gauging food temperature, practicing sanitary precautions and using a fire extinguisher—all the basic skills that enable someone to safely prepare simple meals.

“I sometimes have four or five people in the class who can’t see at all, so I will pair them up with someone with at least partial sight,” Phillips says. “We don’t do foods that are deep-fried, but I can teach them how to flip an egg—we practice with a slice of bread—bake barbecue chicken, and make vegetable soup.”

Phillips, 55, a La Quinta resident, has lived full-time in the Coachella Valley for 23 years. Born and raised in St. Cloud, Minn., he began working in kitchens at the age of 14 as a dishwasher. “In my family, my brothers and I always worked. My parent said we had to work for our ‘stuff,’ so we always had the nicest cars and clothes.”

One night, the fry cook didn’t show up, and Phillips’ boss told him he was going to be the fry cook that night.
“I really didn’t know what I wanted to do. I don’t think anyone really does until after high school,” he said. By age 18, he was already cooking full-time.

Phillips went to culinary school. Some of his teachers owned a catering company, so he picked up additional work. “In those days, we had a cow hanging in the back, and would cut the mold off and cook the steaks. It’s not like that anymore,” he said.
Phillips was working at King’s Supper Club on the Mississippi River when he decided he wanted to take a break from cooking. One of his brothers had started a landscaping business in Moreno Valley, so he headed for California.

“I had never been to California,” he says, “so I went. I worked there for about a year, but I got really tired of pulling weeds in 110-degree heat, so I started working as a cook in a few places.” 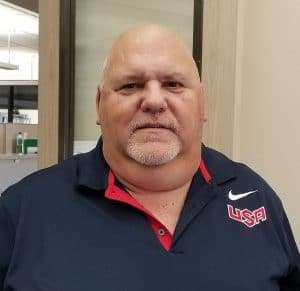 Phillips’ career has taken him from San Bernardino to Solana Beach to Garden Grove, and finally to the Coachella Valley. He’s worked at Fantasy Springs Resort Casino, Casey’s, Ramada Inns, Morongo Casino Resort and Spa, La Quinta Cliff House, Touché in Rancho Mirage, and Agua Caliente Casino Resort Spa, among others places. He has been a head chef as well as a food and beverage manager for 39 years.

“When I worked with Ramada Inns, I had to take 197 hours of education courses in hospitality, including management of both the front and back of the house,” Phillips said. “One of the things I learned is that getting to be head chef and food and beverage manager too often means working longer hours but not getting paid for both positions.”

Phillips said he has seen a lot of Coachella Valley restaurants come and go. “Everyone with a little money thinks they can open a restaurant. They don’t realize the overhead costs, taxes and fees, and that you just can’t keep adding things to the menu.”

His work as a chef is how Phillips met his wife, Caroline. “I was working at a hotel in San Bernardino, and she used to come to get my famous ribs,” he said. “One night, we were out of ribs, and she asked to speak to the chef.” The rest, as they say, is history.

Phillips has a stepson, and he and Caroline have a daughter.

In his 40s, Phillips thought he needed glasses and went to see an eye doctor, who sent him to a retina specialist after diagnosing the “wet” type of macular degeneration in both of his eyes. “Dry” macular is slow-progressing, and can often be controlled with diminishing progression over time. “Wet” macular is fast-moving and treated with injections directly into the eye.

“I’ve had 33 injections already,” Phillips said, “and I have so much scar tissue now that they probably won’t be able to give me shots anymore. I have some peripheral vision in my right eye, but my left eye is pretty well gone. The first time they gave me one of the shots, I thought the first shot to numb the area was bad enough. Now they’ve developed a numbing agent that makes it a lot easier.”

Phillips walks with a white red-tipped cane, has a computer with special devices, and proudly says he “can do anything that anybody else can do.”

Although Phillips has been volunteering at the Braille Institute for the past few years, he was originally reluctant to go there at all.

“I think a lot of people don’t take advantage of what Braille offers, because they figure if they attend, they’ll just learn how to read in Braille,” he says. “It’s so much more than that.”

Phillips not only teaches cooking classes at the Braille Institute; he caters holiday meals and special events for up to 100 people. He also teaches a class in history/philosophy asking what he calls “big questions.”

“People need to know there is so much here that they can do and learn—piano, computers, agriculture, cooking and classes in so many other subjects,” he says. “It’s about learning life skills and sensory awareness. I have one student who is totally blind, and I make him do a lot of the work, because he has ambition. There are a lot of people who just want to sit back and feel sorry for themselves.

“My wish is to see my daughter married and to have grandchildren before I totally lose my sight. I’m fortunate. There are some people who’ve never seen in their whole life.”

What advice does Phillips have? “Never give up. There’s always something more to come.”

With an attitude like that, John Phillips could make me enjoy cooking.