Sight-impaired learn karate in Rancho Mirage. Here’s how the sport has changed their lives.

Isaac Pugh has been blind most of his life. He can see extremely bright lights, but nothing else. He easily became disoriented and struggled with physical balance and confidence.

In January, he decided to enroll in a karate class for the sight-impaired being offered for the first time at the Braille Institute in Rancho Mirage.

“I thought it would help with conditioning,” said Pugh, 64. Instead, he said, the class has given him back his life. “Karate has done more for me than I ever thought possible,” Pugh said.

He is one of four sight-impaired people learning karate at the Braille Institute — a new program started in January by Sensei Tamara Canedo, who teaches karate to all ages through her studio, Seiden Kai in La Quinta. 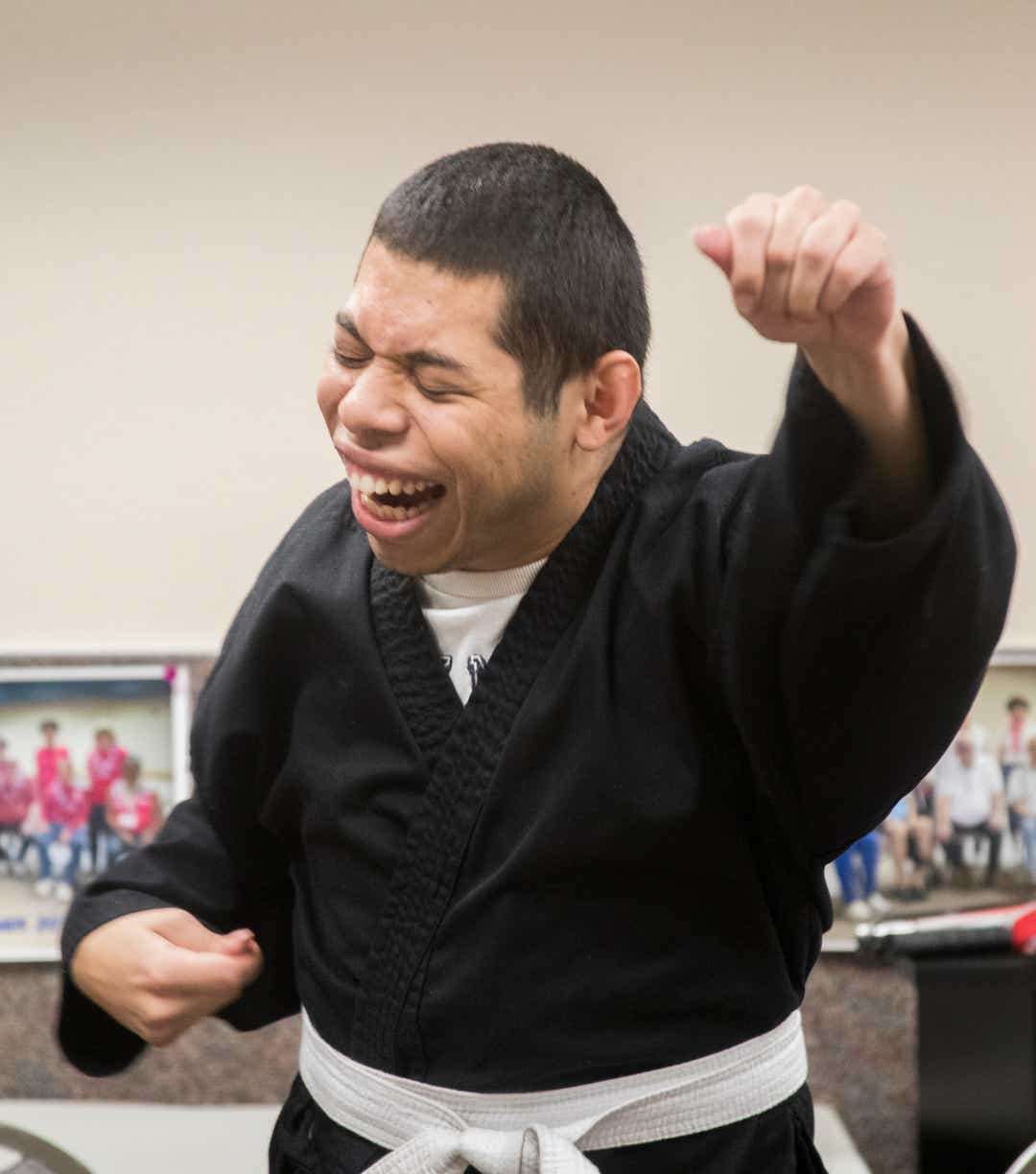 While she works with people with disabilities, this is her first-time teaching sight-impaired students, a course she brought to the Braille Institute in January.

“They are all my inspiration,” Canedo said.

At 30 years old, she’s been involved in karate since she was 3, when she was taught by her father.

Her dream was to take the class at Braille to the U.S. Karate Open in Las Vegas, but did not expect that would happen within four months.
“It usually takes seven to eight months to learn and a year to compete,” Canedo said.

In April, she took Rolly Macadangdang, Tony Delgado and Pugh to the competition, which draws participants from around the world.

They were the only three contenders in the blind/vision impaired category, however, so they competed against each other. Each came back with a medal: Macadangdang, took the gold; Pugh, silver and Delgado, bronze.

But they impressed other instructors and students and brought awareness to the program. Canedo has received several emails from other instructors seeking advice for starting their own program and believes next year there will be more sight-impaired competitors.

For the three men, the medals are not just symbols of victory at the competition, but to each represent personal accomplishment in a short period of time, as well.

Pugh said karate has improved his balance, posture and mobility, as well as self-confidence and situational awareness.

In the past, he could be in a room and want to cross the room to sit on a chair, only to turn around and go off in the wrong direction.

“I was totally disoriented,” he said. “Through karate, I am more aware when I am in a room with people around me and there is no disorientation.”

If Canedo calls him to the center of the room to do a karate routine, he can spin around and at the end get back to his chair without assistance.

“There is no more disorientation,” Pugh said. This has opened the door to a freer life overall. “I never thought I would get the independence that I have now.”

Friends and family don’t worry as much when he goes out, he said. “I never thought this would be part of the bonus of doing karate.”

When he and others first heard that Canedo was going to teach karate to people who are sight-impaired, they all thought she was crazy, Pugh said.

“She’s proved us wrong. I never thought that if someone told me to stand on one leg and kick, that I could … and not tip over,” Pugh said.

Macadangdang was 20 years old and drunk when he put a gun to his head and pulled the trigger.

“The first bullet didn’t fire. So, I reloaded it, fired again and fell to the floor,” he said.

That was 27 years ago in Palm Springs. He recovered but the incident left him blind.

Born and raised in the Philippines, he took martial arts classes as a youth.

“I studied white tiger and kick-boxing,” he said, and is excited to have it in his life again.

Delgado, 57, has retinitis pigmentosa, a rare genetic disorder that started slowly robbing him of his vision in the 1990s, he said. He has some vision — like tunnel vision. He’s been taking classes at Braille for several years and when he heard about the karate program decided to enroll. 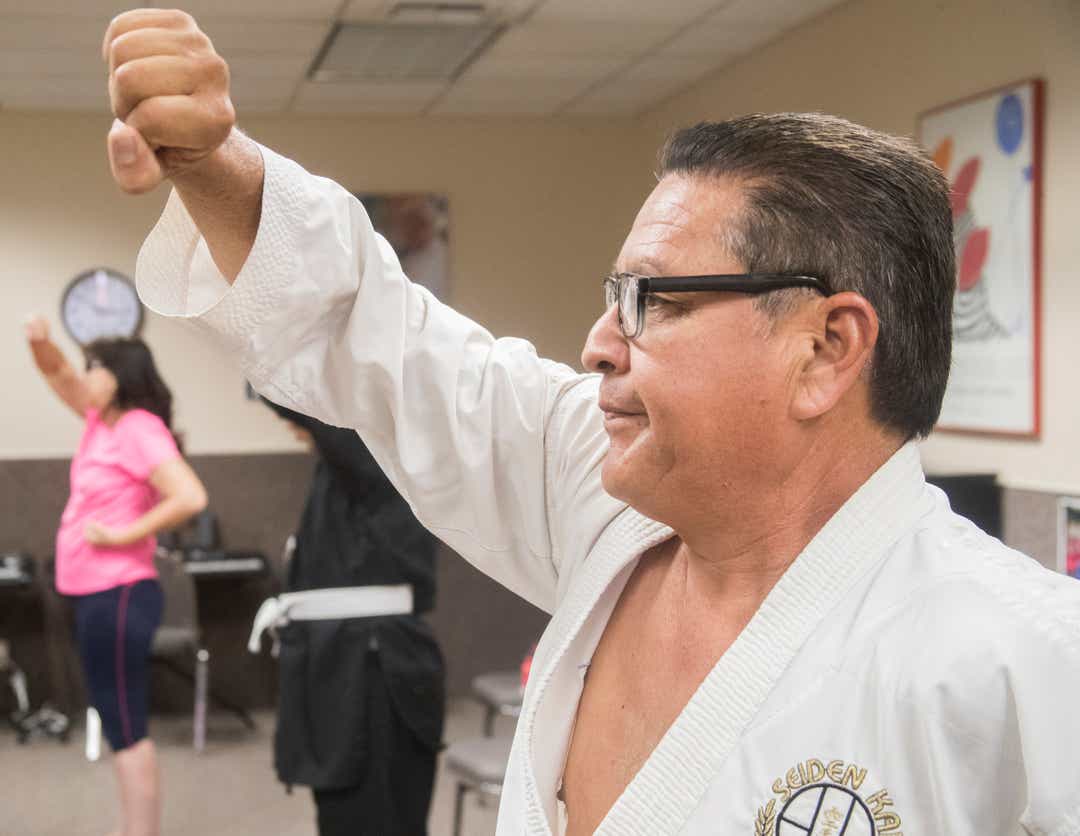 “It’s like putting life back into your body,” Delgado said. “I feel healthier … and sleep like a baby.”

He has more energy since doing karate and has since started taking tai chi and lifting weights as well. He pointed to scars on his face and eyebrow from falling or walking into walls and posts.

The karate class is taught from 10 to 11:30 a.m. Tuesdays at the Braille Institute, 70-251 Ramon Road, Rancho Mirage. For information about karate and other classes and programs, call (760) 321-1111, visit www.brailleinstitute.org or email rm@brailleinstitute.org.

To see the article on the Desert Sun, click here.