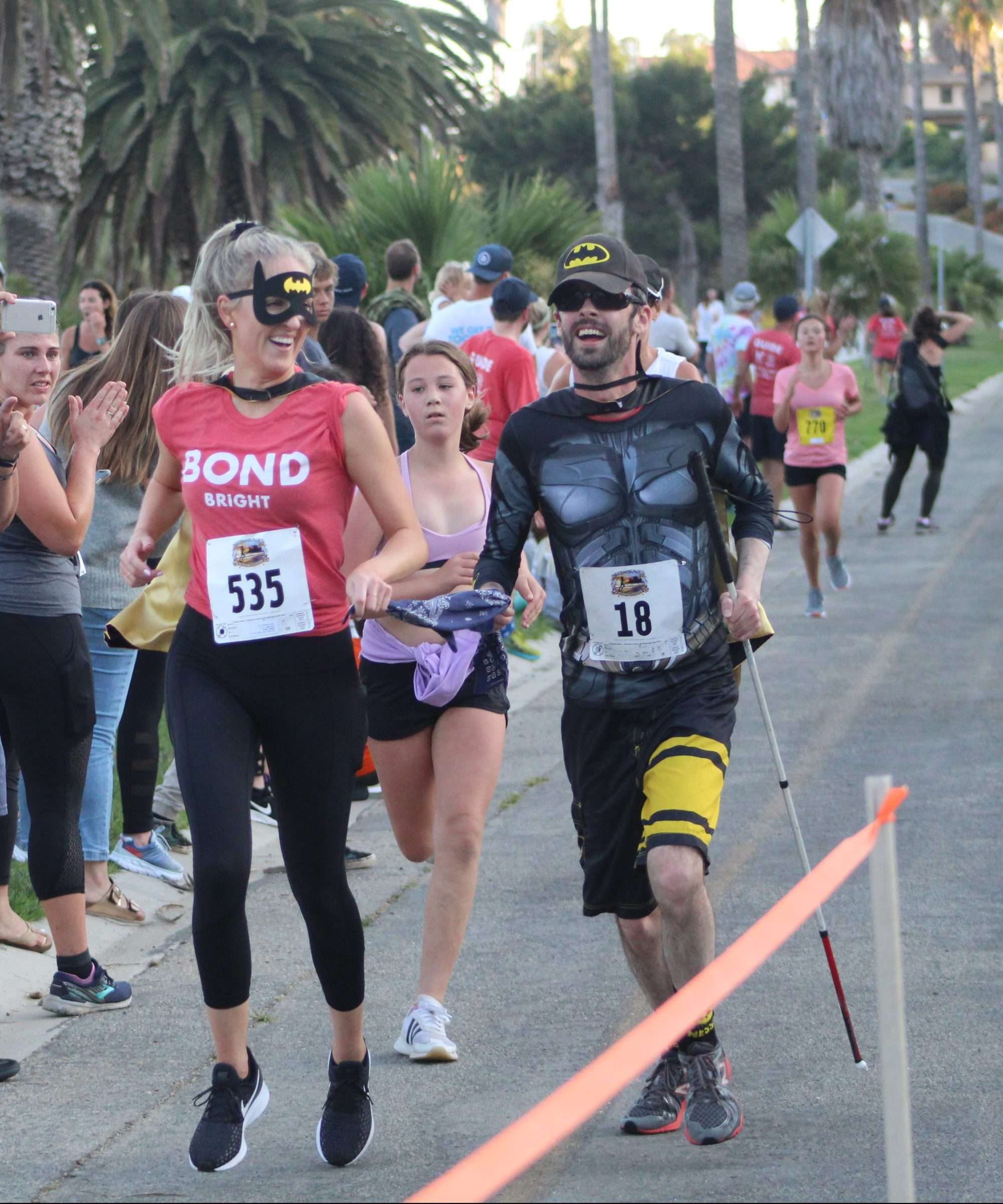 The tandem of Carly Mask and Dan Broz Near the finish line. Photo: Victor Bryant

A partnership between Bond Fitness and the Braille Institute of Santa Barbara that pairs visually impaired runners with volunteer guides culminated at the weekly Nite Moves Summer Sunset Series on Wednesday night at Leadbetter Beach.

The seven-week program trained volunteers from Bond Fitness to serve as guides for visually impaired athletes and 12 tandems participated in the Nite Moves signature 5K event.

“The idea really came to life pretty quickly, and then the response was really strong.”
About 15 Braille Institute students showed interest, and there were twice as many volunteers from Bond Fitness.

Once the ball got rolling, Braille Institute orientation and mobility specialist Brianna Petit spearheaded the task of training the guides to work together with the runners over six sessions, using human guide techniques.

“I’ve never taught running before. Most of it is just walking, navigating obstacles such as doorways and chairs, so this is new for me too,” Petit said. “It’s the guide’s job to be describing the environment, what’s going on in front of them and avoiding obstacles. The athlete is the one kind of setting the pace, and the guide is just there to be their eyes essentially.”

One of the first tandems to cross the finish line was Dan Broz and his guide, Carly Mask, who finished in a time of 31.15. The two began working together a few weeks ago and have benefited tremendously from the experience.

“I was hesitant at first because I’m not good with new things sometimes, but I legit immediately felt comfortable right off the bat” Broz said. “I am eternally grateful. They’ve been absolutely kind and supportive, which has been extremely nice.”

Broz was in an accident where a car struck him two years ago. Despite a nine-month recovery, he hasn’t stopped pursuing his passion for running. When his running partner moved out of town, he quickly discovered the program that the Braille Institute and Bond Fitness put together through a friend.

“These athletes have truly opened our eyes, as cliché or silly as that may sound, to a new perspective on life,” Mask said. “They bring so much energy and joy and light to the track or to the road every single week. It has given us all a greater appreciation for life and the gifts, talents and opportunities we have.”

To view this article on Santa Barbara Independent, click here.