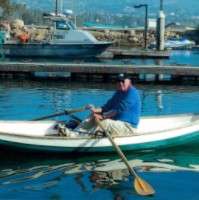 Sailing and reading have been Jerry W.’s lifelong passions.  He grew up near the water and got his first sailboat at the age of 13.

Twenty-five years ago, Jerry was diagnosed with macular degeneration, and thankfully the condition has progressed slowly for him.  Today he only sees peripherally; but even with his limited vision, twice a week Jerry energetically rows a 15-foot training boat in Santa Barbara’s harbor.  “I seldom bump into anything,” he laughs.

The eventual loss of his ability to read hit Jerry hard.  When a friend suggested he visit Braille Institute, he headed straight to the Santa Barbara Center’s Library where he discovered, “You can walk in there and ask for an audiobook on almost any subject you want.”  Jerry reads everything he can on the British Navy in the late 1700s and early 1800s.  “It just enthralls me,” he says.  “Braille Institute has been a life-changer.