From Desperation to a LIfe of Possibilities

From Desperation to a LIfe of Possibilities 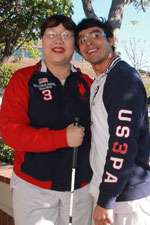 At the age of two, Antonio Smart was found wandering the streets of Mexico City alone and almost completely blind, only able to see shapes and colors with his right eye.

Too young to understand how he got there or how long he had been blind, Antonio was brought to an orphanage where, at the age of five, he was adopted and moved to California with his new family.

Despite the severity of his sight loss, Antonio spent many years trying to conceal his blindness. “It was hard to admit,” he says. In his mid-twenties, he enrolled briefly at Braille Institute and, as he admits now, “I was reluctant to show anyone I couldn’t see and I left.”

Knowing he desperately needed help, Antonio re-enrolled a few years later. “I wasn’t too sure the first week or two,” he says. “Then I started making friends. No one judged me and I felt I belonged.”

That climate of acceptance and possibility, combined with Braille Institute’s broad range of classes, made Antonio “feel more comfortable than ever in my own skin.” Here, he took Orientation and Mobility classes where he learned to use a white cane to walk around town on his own instead of depending on his dad to guide him. Next came basic cooking classes where he learned adaptive techniques in the kitchen that helped him become more self-sufficient. Painting and pottery workshops satisfied his passion for fine art while instruction in the JAWS screen reader enabled him to use a computer with confidence, helping to open up the world to him even more.

Antonio gained even more self-confidence through Braille Institute’s tae kwon do classes and the accompanying lessons in martial arts philosophy. With his newfound self-assurance, he was able to get up the courage to ask his fellow student, Trifena, for a date. “We started going out,” Antonio bashfully continues. “One thing led to another, and I finally proposed.” This year, he and his beloved Fena will celebrate their third wedding anniversary.

Asked what Braille Institute now means to him, Antonio, who earned his black belt this past December, draws on his experience with tae kwon do. “Each belt has a certain philosophy, and my red belt’s was rightness, to know your own heart and always be true to it.” That’s a gift he feels Braille Institute has bestowed upon him. “I want to tell people how empowering it feels for me to come here and be taught everything I need to know to be independent and have a fulfilling life.” In Antonio’s mind, Braille Institute has given him a Life of Possibilities.