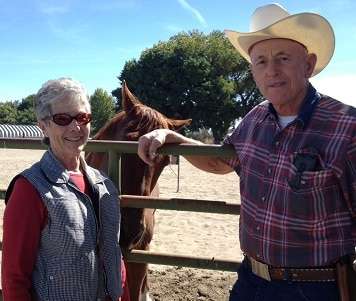 With a cowboy’s plainspoken modesty, Herb F. sums up his life in three words — “I’ve been lucky.”

But his story could fill a book. At age 16, he left home to join the Marines. Next, he became a professional bull rider on the rodeo circuit, touring the West Coast and Japan, and performed as a Hollywood stuntman, doubling for Little Joe in the Bonanza TV series. He was also cast as the original Marlboro Man, where his rugged silhouette was photographed for a black and white print ad that ran in national magazines. Ironically, Herb never smoked.

At a rodeo in 1966, he met Starr, who became his wife. “It was love at first sight,” she says. The couple moved to Nevada where Herb built their own house and worked as a journeyman carpenter. Later, he became a business agent for the Northern Nevada Carpenters Union. Starr raised their two daughters, worked as a church secretary and treasurer, and currently teaches Sunday School and 4-H quilting. Both competed in long distance running races.

Today, the couple celebrates 50 years of marriage and as many years of loyal support for Braille Institute. In fact, Herb was surprised to learn that his very first contribution dated back to when he was 20. “Helping those who are blind or visually impaired is the right thing to do,” Herb said as he reminisced.

Wanting to make a greater difference for people who have vision loss, the couple also funded two charitable gift annuities with Braille Institute. The investment earns high returns while providing them with guaranteed annual payments throughout their lifetime. “It’s a good deal,” says Herb. He quotes a favorite saying: “A cowboy is entitled to one good horse, one good dog, and one good woman. I’ve been blessed with all three. So it’s only right to help those who aren’t as fortunate.”

Your gift keeps our