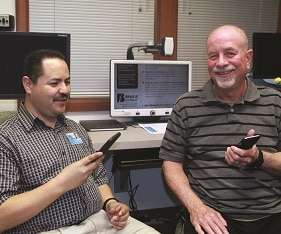 Cliff S. was stunned when his ophthalmologist told him in 1998 that he had retinitis pigmentosa and would eventually go blind.

During the next six years he continued to work, and to drive, while his vision gradually declined. In 2004, Cliff retired.

But then a few years later, as Cliff was driving into a parking lot, he almost hit a woman he hadn’t even seen. “I realized I’d lost my peripheral vision, so I went home, put my keys away, and have never driven since,” he remembers.

Cliff was reluctant to take advantage of our FREE services. But seeing him struggle, a friend eventually convinced Cliff to get help, and he paid us a visit.

Cliff’s goal was to become as independent as possible. “Losing my sight was a terrible blow, but I realized I could either sit around or I could live.” His first class taught him to listen more acutely and gave him tips that made his life a lot easier. Then he learned adaptive cooking techniques, the basics of braille, how to get around town safely with a white cane, and much more.

When his wife broke her foot recently, Cliff was able to manage the household successfully until she recovered — a big milestone for him.

“I am so grateful for everything I’ve learned at Braille Institute — especially all the great teachers and volunteers who helped me along the way. Now, I can do things for myself,” Cliff says enthusiastically. Cliff also benefits from the weekly Men’s Group at Braille Institute where he’s an integral part of a beneficial support system. He especially likes helping those who are new to sight loss. “Our one rule in the group is ‘no whining,’ and that’s my rule for myself too.”

Having experienced the transformative power of Braille Institute firsthand, Cliff and Karen give generously to us knowing that they are helping so many others who are blind or visually impaired gain their independence.

Your gift keeps our