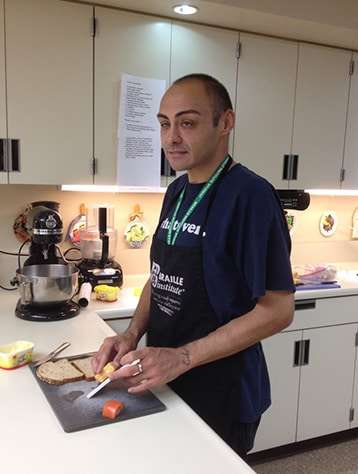 Life was rough for Joseph N. as a teenager. First, his mother died of diabetes; then his father passed away. Spiraling into depression, he dropped out of school. But just as he was starting to get his life back together with the help of medication, Joseph lost vision in one eye. Two years later, while shopping, he suddenly went completely blind. “I started crying in the middle of the store,” he says. Joseph was diagnosed with diabetic retinopathy, glaucoma, and kidney disease, which required dialysis — all due to the same diabetes that had taken his mother’s life.

Although referred to Braille Institute, he says, “I wasn’t ready. I would come up with all these reasons not to go.” After a year spent ‘vegging’ at home on the couch with the TV on, he felt that his “brain was going to mush.” Wanting to do more with his life, Joseph returned to Braille Institute with a new attitude and a desire to begin a new life.

Today, you’ll find Joseph brimming with enthusiasm for the classes he takes — independent living skills, mosaic art, yoga, braille, and cooking. He also enjoys listening to the talking books, particularly mysteries, which he gets from Braille Institute’s Library Services. And thanks to our orientation and mobility specialist, he is no longer housebound, but is navigating around his neighborhood with a white cane and taking public transportation.

Joseph admits his favorite class is cooking, something he enjoyed doing even before he became blind. “Being in class builds my confidence for safely chopping and cooking. Today we fried on the stove. For me, that’s a big deal,” he says with pride.

Even though learning braille can be difficult for an adult who began life sighted, he is successfully beginning to master this skill. Joseph is setting goals for the future. “I want to get my high school diploma,” he says. “And maybe someday, I could even teach braille to children who are blind.”

Thanks to your support, the FREE programs and services available at Braille Institute mean Joseph can have the opportunity to do this, and so much more.